Weeks after Parker Solar Probe made the closest-ever approach to a star, the science data from the first solar encounter is just making its way into the hands of the mission’s scientists. It’s a moment many in the field have been anticipating for years, thinking about what they’ll do with such never-before-seen data, which has the potential to shed new light on the physics of our star, the Sun.
On Dec. 12, 2018, four such researchers gathered at the fall meeting of the American Geophysical Union in Washington, D.C., to share what they hope to learn from Parker Solar Probe.
“Heliophysicists have been waiting more than 60 years for a mission like this to be possible,” said Nicola Fox, director of the Heliophysics Division at NASA Headquarters in Washington. Heliophysics is the study of the Sun and how it affects space near Earth, around other worlds and throughout the solar system. “The solar mysteries we want to solve are waiting in the corona.”
From Oct. 31 to Nov. 11, 2018, Parker Solar Probe completed its first solar encounter phase, speeding through the Sun’s outer atmosphere — the corona — and collecting unprecedented data with four suites of cutting-edge instruments.
Parker Solar Probe is named for Eugene Parker, the physicist who first theorized the existence of the solar wind — the Sun’s constant outpouring of material — in 1958.
“This is the first NASA mission to be named for a living individual,” said Fox. “Gene Parker’s revolutionary paper predicted the heating and expansion of the corona and solar wind. Now, with Parker Solar Probe we are able to truly understand what drives that constant flow out to the edge of the heliosphere.”
Our Sun’s influence is far-reaching. The solar wind, its outflow of material, fills up the inner part of our solar system, creating a bubble that envelops the planets and extends far past the orbit of Neptune. Embedded in its energized particles and solar material, the solar wind carries with it the Sun’s magnetic field. Additional one-off eruptions of solar material called coronal mass ejections also carry this solar magnetic field — and in both cases, this magnetized material can interact with Earth’s natural magnetic field and cause geomagnetic storms. Such storms can trigger the aurora or even power outages, and other types of solar activity can cause communications problems, disrupt satellite electronics and even endanger astronauts — especially beyond the protective bubble of Earth’s magnetic field.

Other worlds in our solar system experience their own versions of these effects, and far beyond the planets, the Sun’s material butts up against the interstellar medium, which fills the space between the stars. The interaction in this region plays a role in how often high-energy galactic cosmic rays shoot into our solar system. All of these effects result from complicated systems — but they all start back at the Sun, making it critical to grasp the fundamental physics that drive our star’s activity.

Parker Solar Probe is designed to address three major questions about the physics of the Sun. First: How is the Sun’s outer atmosphere, the corona, heated to temperatures about 300 times higher than the visible surface below? Second — how is the solar wind accelerated so quickly to the high speeds we observe? And finally, how do some of the Sun’s most energetic particles rocket away from the Sun at more than half the speed of light?

“Parker Solar Probe is providing us with the measurements essential to understanding solar phenomena that have been puzzling us for decades,” said Nour Raouafi, Parker Solar Probe project scientist at the Johns Hopkins University Applied Physics Lab in Laurel, Maryland. “To close the link, local sampling of the solar corona and the young solar wind is needed and Parker Solar Probe is doing just that.”

Parker’s instruments are designed to look at these phenomena in question in ways that haven’t been possible before, giving scientists the opportunity to make new strides in the study of the solar atmosphere.

The electric field antennas of the spacecraft’s FIELDS instrument suite can pick up radio bursts that could shed light on the causes of coronal heating.

The Solar Probe Cup instrument — which extends beyond the spacecraft’s heat shield and is exposed to the full solar environment — measures the thermal properties of different ion species in the solar wind. Coupled with data from the FIELDS suite, these measurements could help reveal how the solar wind is heated and accelerated.

The science team also expects to be surprised by some of what they learn.

“We don’t know what to expect so close to the Sun until we get the data, and we’ll probably see some new phenomena,” said Raouafi. “Parker is an exploration mission — the potential for new discoveries is huge.”

Parker Solar Probe’s reports indicate that good science data was collected during the first solar encounter, and the data itself began downlinking to Earth on Dec. 7. Because of the relative positions of Parker Solar Probe, the Sun and Earth and their effects on radio transmission, some of the science data from this encounter will not downlink until after the mission’s second solar encounter in April 2019.

The mission team did get a chance for some real-world instrument tests during Parker Solar Probe’s Venus flyby in September 2018. Parker Solar Probe made a close pass at the planet while performing a gravity assist to draw its orbit closer to the Sun. Though not expected to study the environment around Venus, Parker’s instruments successfully recorded data, giving scientists an early look at what their instruments are capable of in the harsh environment of space.

As the newest addition to NASA’s fleet of heliophysics missions, Parker Solar Probe works alongside prolific solar and heliospheric research satellites like NASA’s Solar Dynamics Observatory, the Solar and Terrestrial Relations Observatory and the Advanced Composition Explorer. For years — or decades, in some cases — these observatories have scrutinized the Sun and its outflowing material, changing the way we see our star. But they are limited by where they live.

Even as Parker uncovers new information, scientists working with its data will rely on the rest of NASA’s heliophysics fleet to put those details in context.

“Parker Solar Probe is going to a region we’ve never visited before,” said Terry Kucera, a solar physicist at NASA’s Goddard Space Flight Center in Greenbelt, Maryland. “Meanwhile, from a distance, we can observe the Sun’s corona, which is driving the complex environment around Parker Solar Probe.”

The distinct perspectives of these observatories should be a boon for contextualizing Parker’s observations. While SDO is in geosynchronous Earth orbit, STEREO orbits the Sun at slightly less than 1 AU — one astronomical unit is the average distance between Earth and the Sun — making it just a little bit faster than Earth. That means STEREO usually observes the Sun from a different angle than we do here on Earth. Along with Parker’s measurements close to the Sun and often from a different angle than any of our other satellites, this will give scientists a fuller picture of how solar events change and develop as they propagate out into the solar system.

“The STEREO mission is all about observing the heliosphere from different locations and Parker is a part of that – making measurements from a perspective we’ve never had before,” said Kucera. 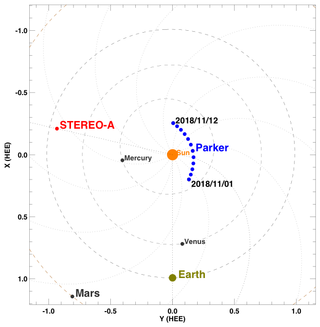 Parker Solar Probe will give scientists another new perspective on the Sun, joining those from other Sun-observing spacecraft.
Credits: NASA’s Goddard Space Flight Center

Modeling is another critical tool for painting the complete picture around Parker’s observations.

“Our simulation results provide a way to interpret both the localized measurements from the in situ instruments, like FIELDS and SWEAP, as well the more global images produced by WISPR,” said Pete Riley, a research scientist at Predictive Science Inc., in San Diego, California.

Models are a good way to test theories about the underlying physics of the Sun. By creating a simulation that relies on a certain mechanism to explain coronal heating — for instance, a certain kind of plasma wave called an Alfvén wave — scientists can check the model’s prediction against actual data from Parker Solar Probe to see if they line up. If they do, that means the underlying theory may be what’s actually happening.

“We’ve had a lot of success predicting the structure of the solar corona during total solar eclipses,” said Riley. “Parker Solar Probe will provide unprecedented measurements that will further constrain the models and the theory that’s embedded within them.”

Parker Solar Probe is in a unique position to help improve models — in part because of its record-breaking speed.

The Sun rotates about once every 27 days as viewed from Earth, and the solar structures that drive much of its activity move along with it. That creates a problem for scientists, who can’t always tell if the variability they see is driven by actual changes to the region producing the activity — temporal variation — or is caused by simply receiving solar material from a new source region — spatial variation.

For part of its orbit, Parker Solar Probe will outrun that problem. At certain points, Parker Solar Probe is traveling fast enough to almost exactly match the Sun’s rotational speed, meaning that Parker “hovers” over one area of the Sun for a short amount of time. Scientists can be certain that changes in data during this period are caused by actual changes on the Sun, rather than the Sun’s rotation.

Illustration of Parker Solar Probe at the Sun.

By continuing to use the site, you agree to the use of cookies. more information